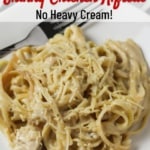 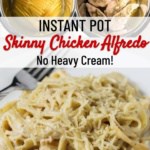 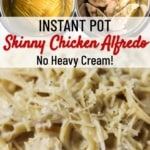 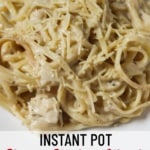 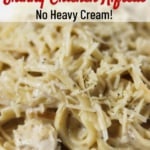 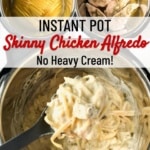 Instant Pot Chicken Alfredo is a quick, easy, and delicious one-pot meal! This version is lighter in calories thanks to using milk instead of heavy cream!

It's super creamy and comforting without being loaded in fat like most restaurant versions! This "Skinny" version doesn't taste like you're missing out on all that fat. It's also kid-friendly and picky-eater friendly.

With a few simple ingredients, it's easy to make simple homemade alfredo sauce and it is a million times better than sauce from a jar.

How to Make Homemade Alfredo Sauce Without Heavy Cream

6 ounces of fat free evaporated milk has only 150 calories. For comparison, 6 ounces of heavy cream has a whopping 600 calories!

The secret to making your alfredo sauce still creamy without the heavy cream is adding a touch of cream cheese. The cream cheese gives the sauce that little bit of extra creaminess that will make you think you're still eating the full-fat version!

Here are the simple ingredients in Instant Pot Chicken Alfredo:

Why Use Linguine Instead of Fettuccine

When testing this recipe, I found that the flat fettuccine noodles don't work well in the Instant Pot. They easily stick together and stick to the bottom of the pot.

Linguine noodles (which are thicker spaghetti noodles) cook more evenly in the Instant Pot and stick together less, so that's what I recommend for this recipe.

Can I Use Fresh Chicken Tenders Instead of Frozen?

Can I Use Chicken Breasts Instead of Chicken Tenders?

No, chicken breasts will take too long to cook and you'll end up with overcooked pasta by the time the chicken would be done.

If you have fresh chicken breasts, you could cut them into tender-sized pieces and then follow the above directions for using fresh chicken tenders instead of frozen.

Another option is to cook the chicken separately (not in the Instant Pot) and then add in the diced chicken at the end.

This recipe has three main steps: layer the ingredients, pressure cook the pasta and chicken, and then mix up the alfredo sauce.

For this recipe, it's important to layer the ingredients in a certain order!

First, put your chicken broth and noodles in the Instant Pot. Break the linguine noodles in half and layer them crossways in the pot.

You want most of the noodles to be submerged in the broth but it's ok if a few noodles are sticking up a little.

Next, put the frozen chicken tenders on top of the noodles. Try to arrange them in a single layer on top.

Sprinkle the garlic, Italian seasoning, and salt on top of the chicken and noodles. Now, you're ready to pressure cook!

Put the lid on the Instant Pot and set to 6 minutes high pressure. After 6 minutes is up, allow a 5-minute natural release before releasing the remaining pressure.

After you open up the Instant Pot, remove the cooked chicken tenders and set aside. Us a meat thermometer and verify that chicken has reached at least 165 degrees inside.

Mix Up the Alfredo Sauce

It's ok if there is some extra chicken broth in the noodles! It will thicken up as you mix up the sauce.

With the chicken tenders removed, set the Instant Pot to Sautee Low temperature. Add the cream cheese and stir until cream cheese is completely melted (2-3 minutes).

Next, add the evaporated milk and parmesan cheese. Stir until cheese is melted and sauce begins to thicken (2-3) minutes.

If your alfredo sauce is too thin, keep sauteeing for a few more minutes and it will thicken up as the liquid cooks off.

If your alfredo sauce is too thick, add additional evaporated milk to thin the sauce.

Meanwhile, dice up your chicken. After alfredo sauce has reached the desired consistency, add the diced chicken back into the Instant Pot and combine.

You're now ready to eat! Grab a big spoonful and it's dinner time!

This recipe does freeze well. I freeze individual servings in plastic containers and often eat them for lunch. To reheat, cook in the microwave at 50% power until heated through.

What to Serve with Chicken Alfredo

I usually serve chicken alfredo with a simple side salad or vegetable. A side of broccoli or green beans goes well with this to round out a complete meal!

One serving of this recipe has 497 calories. Not too bad for a filling pasta dinner!

One serving is about 13 oz or a heaping 1.5 cups. The recipe makes 4 total servings.

To make this with fresh chicken tenders instead of frozen:

As an Amazon Associate and member of other affiliate programs, I earn from qualifying purchases.

Nutrition information provided is an estimate and will vary based on cooking methods and brands of ingredients used.

Hi, I'm Kasey! I create recipes for easy, low-calorie comfort food. By swapping for lower-calorie ingredients and watching my portion sizes, I lost about 50 pounds and have kept it off for 8 years and counting! Simple and healthy home cooking was the key to my weight loss success.